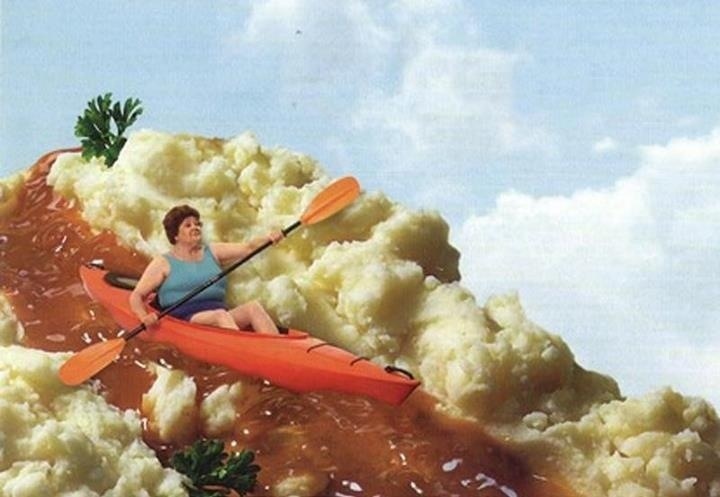 As heart breaking as it is for me, and the rest of Aunt Bessie’s groupies, the Sunday roast looks like it’s slowly but surely going out of fashion. The gravy boat, having been docked for hundreds of years, is taking sail and no one can be sure whether this is for good or not. I, for one, hope that Captain Bisto changes his mind and comes back to shore but the recent changes in British lifestyle and cuisine imply that the Sunday roast is indeed leaving our tables to make way for new eating habits.

As much as it pains me to say, this trend makes perfect sense as Sundays are no longer the day they used to be. Almost all shops are open for trading and this gives Brits an additional day to shop, ponder and do things they didn’t get the chance to do in the week, perhaps because work or social life got in the way. Where previously, families had no choice but to spend time around the house, a Sunday roast took prime position in the weekend’s order of play. Mum would typically slave away at the stove for hours and hours, Dad would do DIY and “fix stuff” and the kids (no matter how old) would play games, sit in front of the TV or fight (classic consequence of being ‘hangry’). Now, a Sunday is tainted with chores and the long hours spent cooking up a feast are considered better spent out the house, leaving no time for a roast dinner and making other, more convenient meals the norm. 25% of Brit’s now only eat a roast once a year on Christmas Day (who are you and can you really consider yourself a Brit?) and 59% of people eat at a different time to their families, showing that the tradition of all sitting together round a table, fighting over the Yorkshire puddings and gorging until you can’t physically move, is for most families, long gone.

In addition to the change in family lifestyles, British food is losing out to other ‘trendy’ cuisines and you can’t get more British than a large piece of meat, crispy potatoes, soggy carrots, a huge Yorkshire pudding and a tsunami of gravy. Italian food is apparently the most popular go-to cuisine and Asian food is also massively on the rise. As well as tastes, people in the 21st century are way more health-conscious and carbohydrates are rapidly losing their place on the menu. A roast isn’t really a roast without potatoes, even sweet potatoes won’t cut it here (no matter how hard Millie Mackintosh tries), and so for a lot of people these days, it’s not unusual to see the roasting tin swapped for a spiraliser in a bid to be healthier.

But roast dinners are engrained in British tradition and it would be such a shame to watch them disappear. They’ve been eaten for centuries and adored by most, with the Yeoman of the Guard (the royal bodyguards) referred to as ‘beefeaters’ and the French nicknaming us ‘rosbifs’, all in name of the Sunday tradition. I’d like to think the food industry will adjust itself to the new trends in the marketplace and begin to offer quick and easy to cook roast dinners and even one for the health-conscious. It’s time to re-educate Britain on just how delicious (and economical) a Sunday roast can be and beyond that, it’s time to recognise the importance of spending time with those closest to you, be it your family or even your housemates, and what a better time to do so than on a cold and rainy Sunday with pile of food that resembles Everest. All hail the Sunday Roast.