It’s the trend that we all wish wasn’t a trend at all but insects are quickly becoming more a friend than a foe in the food industry. Gone are the days when we would demand compensation for finding a bug in our food, now we’re more likely to be ordering them off the menu by the handful. Okay, maybe we’re not quite there yet, but edible bugs are certainly making their way into our culinary repertoires and for all the right reasons.

Entomaphagy is defined as the human act of consuming insects for food and scientists are encouraging us all to engage. We find ourselves in a period of time where the food industry is increasingly concerned about two things, health and sustainability, and it is because of these that we are taking entomaphagy seriously. We’re disturbingly obsessed with protein and rightfully obsessed with the sustainability of our food and a combination of crickets, mealworms and beetles (plus more) could be the answer to all our ab-building-tree-hugging worries.

The news reminds us every single day so I may as well follow suit – we have a frighteningly fast growing population, with 70 million people added to the world every year. By 2050, we’re going to have doubled in size and hence will be tasked with producing twice the amount of food we do now. But 70% of our agricultural land is already being used and that extra 30% won’t be enough to do the job, especially when we have to think about housing these people too. We need to find alternative sources quickly and it’s a surprise we’re only just learning from Asia and Africa, where insects are commonly providing citizens with half their dietary protein. Angelina Jolie may have caused a stir during a Louis Vuitton shoot when she told a reporter that her kids snacked on crickets, but all you’ve got to do is visit a bar in Asia and you’ll be served crickets like they’re peanuts.

Rearing a cow uses 12.5 times more food and a staggering 35 times more water than crickets do to produce the same amount of protein. In a time when resources are more precious than ever, understanding that replacing half the meat eaten worldwide with crickets or mealworms would cut farmland use by a third means we shouldn’t underestimate the environmental benefits this would bring. The EU have already decided to offer financial incentives to member states that promote the use of insects in cooking and for those choosing to switch off from what the EU has to say, just turn to Michelin-starred chefs like Pascal Aussignac or companies such as Eat Grub who are doing their fair bit towards encouraging us to fall in love with these not-so-creepy crawlies. 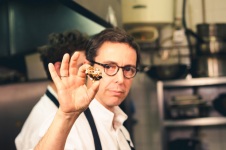 Being eight-legged (or more) in nature means that naturally this trend comes with pushback and not everyone will be chomping at the bit to get their hands on some bugs. But using insects as a source of protein doesn’t have to mean repulsing as you eat a lethal looking scorpion on a stick, as commonly seen in everyone’s gap-yah pics. Some manufacturers are grinding them into powder which gym bunnies are shaking up post-workout and others are disguising them in fruit and nut bars which act as a perfect mid-afternoon snack. For the less-squeamish of us, we can also enjoy insects straight up that have been seasoned with the likes of peri-peri or BBQ. I’m in this camp and can honestly say that if you manage to avoid getting the odd wing stuck in your teeth, these bugs make for a really delicious, and guilt-free, snack. 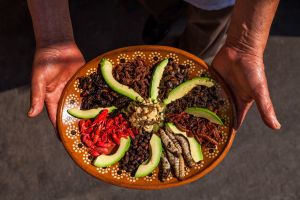 So, even though we’ve been eating bugs for years without really realising it, in the form of red food colouring (thanks Haribo), this is a food trend that will make most of us quiver and therefore will no doubt be a slow-burner. The perceived social hurdle against it is almost as high as the ecological and economic hurdles that paved way for it, so it will be a bit of time before we’re all snacking on crickets like crisps. But as we come face to face with mounting sustainability issues and with a protein fixation that doesn’t seem to be fading, we need to listen to our Eastern counterparts and start to familiarise ourselves with the notion of eating insects in order to feed those 70-odd million extra people that we’ll be meeting this year.

One thought on “The latest buzz about the industry”